French philosopher Bernard-Henri Levy challenged the world at the first-ever UN General Assembly meeting devoted to anti-Semitism to take action to counter the rising hatred of Jews, which he denounced as “radical inhumanity.”

In a keynote address, Levy decried that “faulting the Jews is once again becoming the rallying cry of a new order of assassins.”

The United Nations was established on the ashes of the Holocaust after the Second World War, and one reason was to fight the “plague” of anti-Semitism, Levy noted. He called for new arguments to counter Holocaust deniers and those who deny Israel’s legitimacy. 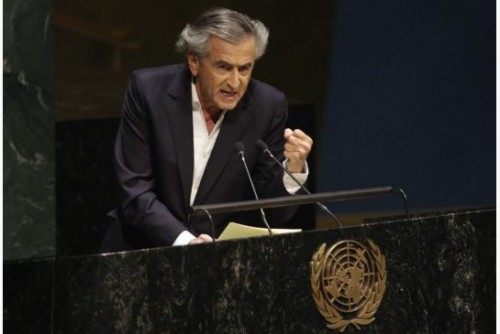 “It is up to you who are the faces of the world to be the architects of a house in which the mother of all hates would see its place reduced,” said Levy, who is Jewish. “May you in a year’s time, and in years after that and every other year, reconvene to observe that the mobilization of today was not in vain.”

The assembly meeting was held in response to the global increase in violence against Jews and was scheduled before the killing of four French Jews at a kosher market during three days of terror in Paris earlier this month. Paris was just the latest attack to raise fears among European Jews, following killings at a Belgian Jewish Museum and a Jewish school in southwestern France.

U.S. Ambassador Samantha Power urged the world to stand up against anti-Semitism and take action to end “this monstrous global problem.”

“When the human rights of Jews are repressed, the rights of other religious and ethnic groups are often not far behind,” she warned.

German Minister of State for Europe Michael Roth warned that “anti-Semitism is gaining ground in a loud and aggressive manner” and posed a threat to society as a whole.

Because of Germany’s role in the Holocaust, he said, his country will always be in the forefront of fighting anti-Semitism and pursuing “a zero-tolerance policy.”

A surprise speaker was Saudi Arabia’s UN Ambassador Abdallah Al-Moualimi, who spoke on behalf of the 57-nation Organization of Islamic Cooperation and told the meeting that Islamic countries condemn all words and acts that lead “to hatred, anti-Semitism, Islamaphobia.”

“We have witnessed with growing concern the increase in hate crimes around the world, and we are very concerned because some arbitrarily reject their responsibilities in this regard,” Al-Moualimi said. “Anti-Semitism and Islamaphobia and all crimes that are based on religious hate are inextricably linked, they’re inseparable.”

The UN meeting was informal, and about half the 193-member states did not attend, but nearly 50 countries were slated to speak.