This is just too priceless. Read and then a strong suggestion to you all…DO THE SAME THING HE DID, I KNOW I PLAN TO IN THE FUTURE.

The idea of beating the banks at their own game may seem like a rich joke, but Dmitry Agarkov, a 42-year-old Russian man, may have managed it. Unhappy with the terms of an unsolicited credit card offer he received from online bank Tinkoff Credit Systems, Agarkov scanned the document, wrote in his own terms and sent it through. The bank approved the contract without reading the amended fine print, unwittingly agreeing to a 0 percent interest rate, unlimited credit and no fees, as well as a stipulation that the bank pay steep fines for changing or canceling the contract. END_OF_DOCUMENT_TOKEN_TO_BE_REPLACED

A Canadian woman’s attempt to expose her hometown mayor to the complexities of a gender equality issue caused some buzz after she took her top off mid-interview. END_OF_DOCUMENT_TOKEN_TO_BE_REPLACED

The Original CALL CENTER Movie in its entirety.

WHEN BUDDISTS start torching Muslim homes then you know we are in an undeclared Religious War…WORLD WAR 3 will begin someday soon…the markers are already here. Can it be stopped. It can but it is all in the hands of non-radical fundamentalists Muslims. Will they stand up against the terrorists, radicals and fundamentalists? I would like to think it would be possible but I doubt it will happen.

HTAN GONE, Myanmar (AP) — Members of a 1,000-strong Buddhist mob torched dozens of homes and shops in northwestern Myanmar following rumors that a Muslim man tried to sexually assault a young woman, officials and witnesses said, as the country was once again gripped by sectarian violence.

The rioters, who sang the country’s national anthem as they rampaged, dispersed after security forces arrived early Sunday, shooting into the air. No injuries were reported. The hours-long riot in Htan Gone village, located 16 kilometers (10 miles) south of the town of Kantbalu in the region of Sagaing, began late Saturday after a crowd surrounded a police station, END_OF_DOCUMENT_TOKEN_TO_BE_REPLACED

Read this and then I will give you my feelings at the end…Guess our national leaders didn’t expect this. Darrell Scott, the father of Rachel Scott, a victim of the Columbine High School shootings in Littleton, Colorado, was invited to address the House Judiciary Committee’s subcommittee. What he said to our national leaders during this special session of Congress was painfully truthful. They were not prepared for what he was to say, nor was it received well. It needs to be heard by every parent, every teacher, every politician, every sociologist, every psychologist, and every so-called expert! END_OF_DOCUMENT_TOKEN_TO_BE_REPLACED

On her radio show, Dr Laura Schlesinger said that, as an observant Orthodox Jew, homosexuality is an abomination according to Leviticus 18:22, and cannot be condoned under any circumstance. The following response is an open letter to Dr. Laura, written by a U.S. man and posted on the Internet.

Christopher Jordan writes:
Dear Dr. Laura,
Thank you for doing so much to educate people regarding God’s Law. I have learned a great deal from your show, and try to share that knowledge with as many people as I can. When someone tries to defend the homosexual lifestyle, for example, I simply remind them that Leviticus 18:22 clearly states it to be an abomination … End of debate.

I do need some advice from you, however, regarding some other elements of God’s Laws and how to follow them. END_OF_DOCUMENT_TOKEN_TO_BE_REPLACED

Here is an article from Alex Kuzio.

HOUSTON — NRA Vice President Wayne LaPierre has offered his organization’s take on the real causes of yesterday’s mass stabbing that left 14 Texas community college students injured. “If the students at Lone Star College had been armed—say, with AK-47’s—this never would have happened,” he wrote in a hastily-released memo. “Knife rampages don’t last very long once a shooting rampage has begun.” END_OF_DOCUMENT_TOKEN_TO_BE_REPLACED 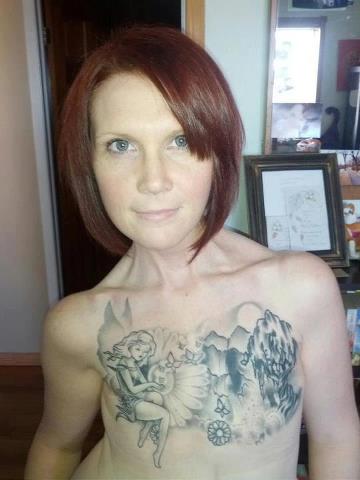 Three time cancer survivor (Hodgkins, Breast and Thyroid) who after having a double mastectomy, opting not to have reconstruction, had a tattoo put where her her breasts used to be. “My tattoo symbolizes a transformation, my metamorphosis, like a butterfly I changed on the outside but remained the same on the inside. It is my badge of honour and strength, a piece of beautiful art that I wear with pride because it represents how I kicked cancer’s ass and how breasts don’t define who I am as a person or a woman.”

Much love to all the cancer warriors (here or no longer here) and their supporters, keep fighting the fight!!!

My luck is so bad that if I bought a cemetery, people would stop dying.

You know, no matter how much a wolf tries to hide in sheep’s clothing eventually the true nature of the wolf manages to sneak out and expose it’s real self to the world as it was in this case.

When a viewer asked what should be done to someone disrespectful of Mohammed, a host said it was the duty of a Muslim to murder him.

A confession written by the cleric stated that his act was “the best way to punish his wife for rebelling against Allah’s orders.”

Where do these guys rid this shit. Where in the Koran does it say that women have to be veiled. Obviously it isn’t in there or all the Muslim that do not have to veil up are breaking the rules. No, this is just the way that impotent men need to protect their sex doll because they worry they may lose their sperm receptacle if others see her. They are ignorant sick perverts, period. This guy took it even farther then he should have. Read on.

A Muslim man in Egypt killed his wife because she was reading the Bible and then buried her with their infant baby and an 8-year old daughter. The girls were buried alive! He then reported to the police that an uncle killed the kids. 15 days later, another family member died. END_OF_DOCUMENT_TOKEN_TO_BE_REPLACED

TODAY I wondered why am I doing a blog like this. It takes up time and keeps me on the computer longer than I really want to be. I figured that like most bloggers we feel the need to have people read about what we really feel. Sometimes I guess it cathartic to dump all our crap on you, the reader. We get to get things off our chest and hopefully find people who may agree with your feelings or at least want to read about what the blooger has to say. More than likely you are like the blogger and want to find a place where someone else feels the same way you do about things. Do you think that is the case? Is that why you are reading this blog?

I hope that when I put my thoughts to paper (so to speak) that it helps or entertain you in some way while I pass on ideas and entertaining bits your way. I try to write about all sorts of things but sometimes I find that I write too much about one thing in particular and I wish I didn’t have to but unfortunately it is the ‘soup de jour’. I guess that part is to allow me to vent about thinmgs that terrify me and cause me to wonder about where the world is headed in the future. Will the world be a savfe place to live in or will our children’s children be condemned to live a life for religionous dogma that is of the worst kind or will the the occurences that are in our everyday lives even be important if we destroy our selves in a religious war that we are currently in. Then again we we even survive the damage we are doing to the planet or that possible invasion from the stars that may someday come because after all we are letting the universe know we are here waiting. So much to think about and worry about.

Well, if somebody would let me win the big multi million dolar lottery then I wouldn’t worry so much…wait not true….I would probably worry about losing it all.

I guess when it comes right down to it it would be best if we lived our life for today and enjoy the small amount of time we have and let the next generations worry about their lives, whether it be war, religious upheavel or invasion from the stars. I gues if it is important to us we will do what we need to keep what we have and we have to trust that they will do likewise.
Okay I have vented enough for now, so on to making supper. Enjoy your life and you supper. Peace and out.

It is always a good idea to realize that people of all races, colours and creeds should always look to the past for the bad things that happened in history. It is equally important to look into the past to see the good that people have done to realize that you’re what may be perceived as your enemy today was at one time your Allie. This story based on historical fact that was made into a book and movie is something that we all wish was listened to by those who condemn others today. The bad guys always under the right circumstance can be the good guys especially when religion is put aside to help your fellow man. This is a tale of the Second World War; please take the time to read it.
That time the Paris Mosque helped Jews escape the Nazis by giving them Muslim IDs END_OF_DOCUMENT_TOKEN_TO_BE_REPLACED