This past while I have been really critical of bitching Americans who are all upset because they have to scrimp for healthcare. It is their fault, they got what they wanted, because they are to stupid to realize what they should have, by right. Universal Healthcare is something they all deserve but no they would rather stuff the pockets of hospital shareholders and greedy medical practitioner’s. Sooner or later, maybe they will get off their asses and get their government to give them what the rest of the civilized world has. The one thing all people need from their governments is Universal healthcare…everything else is secondary.
Anyway read on…. END_OF_DOCUMENT_TOKEN_TO_BE_REPLACED

Has Obama and the rest of the deal makers made the right decision. Maybe, but somehow I doubt it. Only time will tell. But according to Iranian news sources they got the best of all of us. Read on… END_OF_DOCUMENT_TOKEN_TO_BE_REPLACED

I just had to show you this cartoon. Walmart at it’s best…it would be so funny if it wasn’t true…
END_OF_DOCUMENT_TOKEN_TO_BE_REPLACED

Sarah Palin: “Thanksgiving is for Real Americans Not Indians”

Sarah Palin has put her foot in it again. You may recall back in 2008,when then Gov. Sarah Palin, fresh off her Vice Presidential bid loss, did what has become customary of many Governors. She went to a turkey farm to pardon one lucky bird. After the pardon she paused for a photo op in what has now been dubbed,” the greatest turkey-related disaster in political history”. Yes folks, she decided standing right in front of the machinery that grinds the heads off turkeys would be the perfect spot for the photo shoot.
END_OF_DOCUMENT_TOKEN_TO_BE_REPLACED

Yesterday we went to the hospital to visit my daughter’s father-in-law. We had put it off because I just did not know what to say to him. I knew he was dying of cancer and I guess the fact I went through this same situation a few months earlier, I just found it hard. You, know how it is when you are getting older and realize this happens to so many and it could happen to you at anytime, it is scary.

My daughter went to see him in the morning. She was restless at work and was between laughing and crying and her bosses told her to go see him. She finally did and she was the last to see him alive and I am glad she did. She needed this as she never had a chance to say goodbye to my father when suddenly passed away. We both flew to my parents house when my mother called and we saw him and there was no chance to see him off. This time she had a chance to say goodbye just as I had done with my friend a few months earlier. Sometimes that is important.

Kelly, is a trouper and an organizer and she will be a blessing to her mother in law and will keep things moving along.

My grandson, Anthony, a bright and wonderful boy came up with the most beautiful thing to say after he was told. He was asked how he felt and he said he was okay because he knew his nonno was going to be okay because he was now at the gates. When he was asked what gates, he said those in heaven where Jesus is there to let him in. So he knew that everything was going to be okay for his nonno. I love that boy. I wish my father had been here to see him.
Okay i have to stop now, I’m getting somewhat over whelmed. Thanks for listening. Goodbye Luigi, your family will miss you.

These pictures of Ahmad and Fatima, a young married couple who, despite Ahmad having no arms and Fatima having no legs, take care of each other. 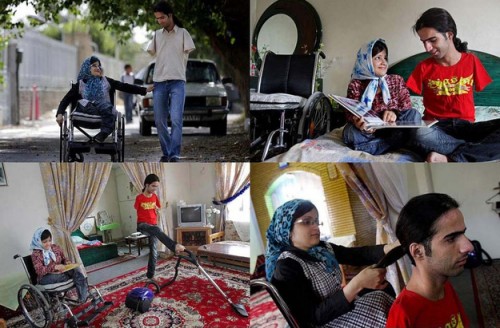 When I see these pictures it shows me and hopefully everyone that life has nothing to do with politics or religion. It has to do with people caring about other people no matter the sad or awkward situation we are put in, in life. I see this and I see possible hopes for a bright future if all peoples no matter their religion, their politics or their race got together to work with each other in unison to help each other. When I see this couple I see hope…the question is do all those who are threats see this possibility. I wish they would and I wish God, if he does exist, would put this in their hearts and release them for blind servitude. I wish and I hope.

Muslim immigrants pray during Eid al-Adha in front of Athens university in 2010. Local residents threw eggs in protests of the illegal take-over of public space in a central square of the capital. (Photo: © Reuters)

So, once again, if you are Muslims and you threaten trouble you will get your way. Maybe the rest of us should threaten governments with violence and we could get our way. No, wait, you see as citizens and not Muslims, we will get thrown in jail for threatening a government. So the lesson to be learned from all this … if you are a Muslim you get whatever the f**k you want as long as you use threatens. It seems not only are citizens afraid of Muslim violence but so are governments. I tell you we will all get what we deserve because we are all a bunch of chicken shits when it comes to Islam…no, make that we are a bunch of cowards and they deserve to eventually be in control of our lives and our world. Live with it.
Below is the article for you to peruse in fear… END_OF_DOCUMENT_TOKEN_TO_BE_REPLACED

Nice to see one Muslim Iman tell it like it really is. Does he represent all Muslims? He probably does, at least, the radical ones. We just have to ask, when it comes down to it, will all Muslims tow the party line? They are not wishy washy Christian people; they stick by their beliefs and they have no qualms about sticking by their beliefs, where as Christians are no longer sufficiently strong enough in their beliefs to defend their religion like Muslims do. Too bad for Christians, I guess.

A little bit of christian propaganda but at the same time the Muslim stall holders seem really upset by cameras when asked questions. I wonder why? HMM, ARE THEY CAMERA SHY??? It seems they just don’t want to answer questions that can be recorded and possible used against them. Of course the officials really don’t help the situation much. Oh well you watch and you decide what to make of this.

Santa Claus has the right idea. Visit people only once a year.

The folks at Archie decided to take a chance with something so off the wall for the Archie franchise. AFTERLIFE WITH ARCHIE is new ongoing series is totally different and daring. The idea of the walking dead is obviously not new of course, but not many people out there would have thought that ARCHIE would go down this path. The first issue was really good and I am looking forward to reading more. So, this is my plug for this book. Want to try something different, then whether you’re new to Archie or an old time fan, this book is for you. Give it a try. 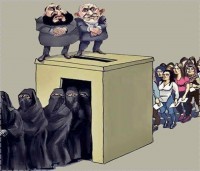 Yup ladies this can be the future of…YOU…the western ladies. Look at it this way, when you leave home you don’t have to worry about needing to chose which clothes to wear when you go out. Once again we can make it a man’s world. HOO RA!

Harold Jellicoe (“Coe”) Percival died at the age of 99, entirely alone. He was a celebrated World War II veteran and bomber commander. He wouldn’t have anyone to attend his funeral service, so a soldier injured while serving in Afghanistan, Sgt Rick Clement, was determined to make sure he was given a proper send off. The response his plea received was incredible.
END_OF_DOCUMENT_TOKEN_TO_BE_REPLACED

Not much to say here. Just hold your breathe as you watch.

For every one of these people who were lucky, another 50 in Russia were unlucky.