A confession written by the cleric stated that his act was “the best way to punish his wife for rebelling against Allah’s orders.”

Where do these guys rid this shit. Where in the Koran does it say that women have to be veiled. Obviously it isn’t in there or all the Muslim that do not have to veil up are breaking the rules. No, this is just the way that impotent men need to protect their sex doll because they worry they may lose their sperm receptacle if others see her. They are ignorant sick perverts, period. This guy took it even farther then he should have. Read on. 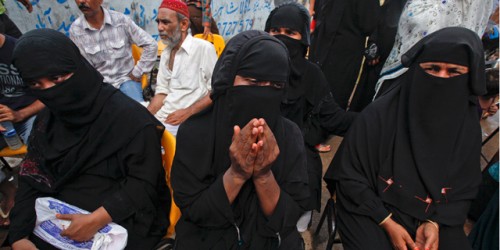 
A Pakistani imam being sought by police confessed to chopping his wife into pieces because she refused to wear a veil and for sending their children to school, police said.

Muhammad Sharif, 42, of Bakkhal Bhir, was the prayer leader at his neighborhood mosque and also gave Quran lessons in his home. Sharif was known to be short-tempered; his wife, Farzana Bibi, was often the victim of his violence. Although Bibi wore an abaya (a long cloak), Sharif continually insisted that she cover her face with a veil when she left the house, making the topic a constant source of friction.

Police found Bibi’s body not far from their house. They also found the murder weapon along with a confession written by Sharif stating that killing Bibi was “the best way to punish his wife for rebelling against Allah’s orders.”

Sharif added that he wanted all women to note the example. He also wrote that he did not want to be responsible for her sins and thus killed her. In addition, he said he was punishing her for a number of transgressions, such as sending his children to attend regular schools as opposed to religious schools.

Sharif said that against his will, his wife enrolled the children in an English school and was being punished for not listening to him and leaving the house without covering her face with a veil. He also confessed that he had been contemplating the murder for quite some time.

Finally, one morning after the children had gone off to school, he grabbed her and cut her body up into 10 pieces.The children are in the custody of their grandparents while Sharif is being sought by police.