Good for her: Michelle Obama passes on headscarf during trip to Saudi Arabia

She didn’t do anything that Laura Bush didn’t do (although Bush did once don a scarf in Jeddah when a group of cancer survivors presented her with one), but as the west’s elite slowly assimilate Islamic norms on blasphemy, affronting the Kingdom by eschewing a scarf feels more transgressive than it used to. I wonder if she’ll be the last FLOTUS to maintain this tradition. If the future must not belong to those who would slander the prophet of Islam, presumably it also shouldn’t belong to women who would offend his inheritors by their immodesty.

The headscarf is a less restrictive version of the veil but, per Ayaan Hirsi Ali, they’re both badges of inferiority.
“The veil deliberately marks women as private and restricted property, nonpersons. The veil sets women apart from men and apart from the world; it restrains them, confines them, grooms them for docility. A mind can be cramped just as a body may be, and a Muslim veil blinkers both your vision and your destiny. It is the mark of a kind of apartheid, not the domination of a race but of a sex.” 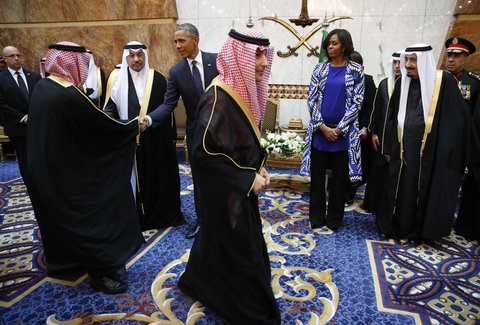 Hirsi Ali once made the point in an interview that the veil forces women to take responsibility for men’s sexual self-control. It’s too much to expect men to resist temptation around a woman who’s displaying her hair or more; forcing them to cover up reduces the male urge to sin. The headscarf is a smaller concession to the same belief in a country where a woman who’s been gang-raped can be punished with 200 lashes for riding in a car with a male non-relative. And while it’s true that foreign women aren’t required to wear the scarf, there’s obviously some pressure for them to do so — even at the highest levels. Via Jane Parent, here’s a charming encounter from Condi Rice’s memoir about the late King Abdullah:

When Rice visited Saudi Arabia’s Crown Prince Abdullah, he presented her with a gift. “I opened the package and realized that it was … the black robe and veil Saudi women traditionally wear,” Rice wrote. “‘I had it made especially for you,’ he said tenderly. ‘Our women wear them.’ Yes, as a sign of oppression, I thought. But it was so dear, and he meant well.”

That’s the guy who’s been celebrated the past week as a Saudi reformer. Michelle Obama, having caused a ruckus in Saudi social media by passing on the scarf, slyly reminded everyone of how far reform has to go. I wonder how much the politics of all this drove her decision and how much of it was a pure comfort/tradition/fashion thing. And why skip the scarf today if she was willing to wear one in Indonesia in 2010? Maybe she’s become more sensitive over time to the oppression of women in Muslim countries. Or, more likely, maybe it was a pure protocol thing: The Indonesia trip involved a visit to a mosque whereas today’s visit was just a meet-and-greet with the new Saudi king. That distinction is thin — apart from the Vatican, there’s no state in the world whose civic institutions are more enmeshed with religion than the Kingdom — but a White House that’s too “sensitive” to even use the term “radical Islam” anymore to describe terrorists surely is too sensitive to violate Islamic customs at a mosque. Whether FLOTUS wanted to or not, she was wearing that scarf.