Before it Americanizes the conflict, the U.S. should take stock of escalating regional revulsion against the Islamic State. 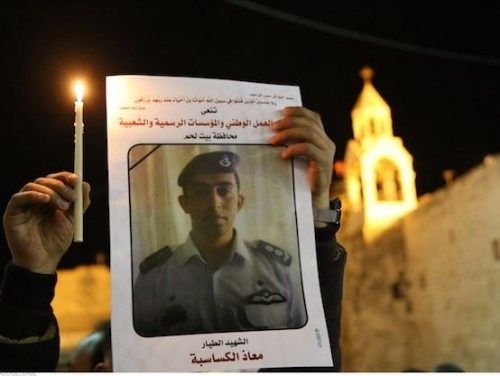 Suicide bombings are a terror tactic frequently associated with the more militant strains of Islam. Might the Islamic State be committing suicide in a more literal sense?

ISIS unveiled perhaps its most gruesome video yet, the burning alive of a captured pilot locked helplessly in a cage. His tortured screams, flailing arms, and melting flesh leave an indelible mark on anyone who watches.

Yet it’s worth noting the victim is himself a Sunni Muslim, wearing the uniform of a country that is well over 90 percent Muslim, in service of a Muslim king who is now crying out for revenge against the Islamic State.

Thousands took to the streets of Jordan’s capital to denounce and protest against ISIS. The Jordanians released jihadi preacher Abu Mohammed al-Maqdesi, who denounced the pilot’s murder as “unacceptable in any religion.”

Al-Maqdesi has been described in the press as a “spiritual mentor” to Abu Musab al-Zarqawi, a brutal former leader of al Qaeda in Iraq. He had been in prison for opposing Jordan’s airstrikes against ISIS. Now he is criticizing the terror group.

Even before this latest outrage, a spring 2014 Pew Research Center poll found that Jordanian concern about Islamic extremism in their country had spiked from 54 percent to 62 percent.

Pew’s Richard Wike notes, “Early in the last decade, Jordanians expressed relatively high levels of support for suicide bombing and confidence in Osama bin Laden, but this changed after the November 2005 suicide attacks on three hotels in Amman, Jordan’s capital.”

These results are consistent with the organization’s polling of other Muslim populations. Islamic radicals frequently enjoy high levels of support from Muslims who view their faith and homeland as being under attack by outsiders. But public opinion changes as the Islamists inevitably start oppressing and killing other Muslims.

This is especially true when the Islamists attempt to govern. Palestinian disapproval of Hamas is actually higher in Gaza, where the organization is control, at 63 percent, than in the West Bank, where only 47 percent have an unfavorable view. More than two-thirds of Israeli Arabs hold an unfavorable view of Hamas.

The percentage of Pakistani Muslims who told Pew suicide bombings were justified collapsed from 41 percent in 2004 to 3 percent a decade later. At the same time, opposition to Hamas has exploded from 33 percent to 70 percent.

All of this may tell us something about how best to confront ISIS, as Congress prepares to weigh an authorization of military force. (The military force is naturally already occurring before the constitutionally required congressional authorization.)

The U.S. has an interest in seeing ISIS defeated and preventing vast swathes of Iraq and Syria from becoming like pre-9/11 Afghanistan. But it is possible that too large an American role in the anti-ISIS campaign, one that resembles a return of the occupation of Iraq, may backfire.

Islamists feed on their image as dogged fighters against Western occupiers. They alienate local Muslim populations when they try to terrorize and rule.

Yes, the matter is complicated. Iran, Hezbollah, and the Shia militias in Iraq are also aligned against ISIS. Perhaps the coalition will fragment along Shiite and Sunni lines.

Nor should we mislead ourselves that the growing regional revulsion against Islamist attacks on Muslims signals a widespread acceptance of Western-style liberal values in the Middle East or the broader Muslim world.

Americans who see footage of ISIS’s evil deeds and tire of the president’s haughty lectures about the Crusades may lack the “strategic patience” the administration recommends.

But we must ask if a re-invasion of Iraq is precisely the war the barbarians of ISIS want and hope to provoke. If it is, then denying them that war as their coreligionists begin to turn against them may be a key to victory.

ISIS has succeeded in murdering and terrorizing. When it comes to providing a quality of life the residents of a meaningful nation-state will want to endure, the organization will always fail.

We cannot turn a blind eye to ISIS. Neither can we ignore what actually seems to have an actual impact in curtailing ISIS’s support in the Muslim world.