Warning: Declaration of Blogger_Import_List_Table::prepare_items($blogs, $JSInit) should be compatible with WP_List_Table::prepare_items() in /www/sites/thestarlite.ca/www/vinniesblog/wp-content/plugins/blogger-importer/blogger-importer-table.php on line 14
 Staggering Numbers of Women Converting to Islam…HUH!!! | Vinnie's Blog 
Warning: count(): Parameter must be an array or an object that implements Countable in /www/sites/thestarlite.ca/www/vinniesblog/wp-includes/post-template.php on line 240

Why…this is beyond me. Here is an article that surprised me as I can not see a woman’s logic in converting to Islam. I can see it if you marry a Muslim but for any other reason I have to say…huh?

Tue, March 12, 2013
by: Abigail R. Esman
Aminat Kurbanova became radicalized after converting to Islam. Kurbanova blew herself up, killing 7 people with her, inside a mosque after hearing the cleric speaking against the radicalization of Muslims in Russia’s Dagestan region.The first thing the Dutch girl did once she’d converted to Islam was change her name – to Soumaya, she says, because “she was the first martyr. She was prepared to die for Allah.” 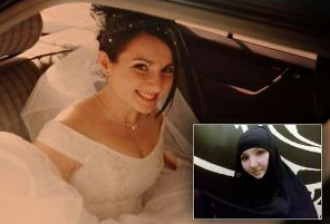 Soumaya, née Aphrodite, is one of a wave of tens of thousands of Westerners who convert to Islam every year, more than 75 percent of whom, astonishingly, are women. Equally surprising is the fact that most of these women gravitate to conservative Islamic groups – the more misogynistic and oppressive ones – insisting all the while that they feel “liberated” and “free.”

Reading through dozens of stories of such women, one can’t help but notice the similarities among them. All claim to have embraced Islam of their own free will; yet an overwhelming majority, like Soumaya (whose story was profiled in the Dutch newspaper Het Parool), converted only after dating (or wedding) a Muslim man, usually – interestingly enough – a Moroccan (even in countries like England, where Moroccans do not form the majority Muslim population).

Others speak of “finding themselves” after years of wild drink and drugs – a pattern similar to that found in male prison converts, who often are convinced by other Muslim inmates to seek salvation through Allah. They repeat, as if by rote, the same rhetoric about escaping the sexual objectification of women by adopting the hijab or full-body abaya, as if in their previous life it had not occurred to them to dress in maxi skirts or loose-fitting turtlenecks and jeans.

(Hilariously, Aphrodite/Soumaya, along with all the other young women profiled, appears photographed in hijab and a full face of makeup – which, of course, is what women wear in order to appear more beautiful to men.) In so doing, they ignore – I would argue, are made to ignore – the very essence of what such coverings in fact represent: The notion that a woman is nothing but sexual object, and therefore must be kept hidden, just as, in the West, we hide our genitalia.

That this fact is not explained to these women and young girls is what has many feminists concerned, not only about Muslim women in general, but particularly, about converts, who are, as it were, handed Islam in small, attractive bites, sweetened artificially and served up on flowered plates.

Most of these young women display little self-confidence or ability to define their own values and behavior – qualities that make them easily influenced by others, and susceptible especially to those who offer up a lifestyle option that relinquishes them from responsibility for their actions, that gives them a code of behavior and the ease of attributing what they do or wear or eat to God and not to self.

And because their profiles are so similar – young, female, insecure, seeking structure and an identity– it isn’t just seducing women to convert that is made so easy. Recruiting by radicals can be — and is –performed virtually programmatically.

Over and over, for instance, young female converts speak of wanting to be a good Muslim and a good wife; the two become equated, acted out in a life of feminine submission, first to her husband and then, by extension, to Allah.

This is dangerous stuff. Indeed, as the BBC reported as early as 2010 , often Muslim women are targeted by extremist recruiters for jihad precisely for their willingness to follow the advice of more “knowledgeable” Muslims and the commands and demands of Muslim men.

Islamists often prey on their emotions, exposing these girls to videos of child victims of war in Iraq and Afghanistan, while explaining the importance of violent jihad.

Speaking to the BBC, then 32-year-old Hadiya Masich (not a convert), who was recruited by members of the radical Hizb-ut-Tahir, explained that “once they’ve established that suspicion (against the West)…that emotion can be challenged in various ways, including violence.”

Violence, however, is rare among women – though the frequency is increasing at an alarming rate. Radicalized Muslimas are far more likely to take part in terrorist plots indirectly, either, say, by raising their sons to be suicide bombers, or by sending funds to terrorist groups.

The trend is also notable in the US, where in between 2001 and 2010 alone, seven Muslim women – including four converts – were convicted on terrorism charges. An ADL report observed, “Foreign terrorist organizations have also sought to recruit female operatives with Western appearances.

In January, 2010, for example, reports surfaced that Al Qaeda in the Arabian Peninsula, Al Qaeda’s affiliate based in Yemen and Saudi Arabia, had formed a brigade of non-Arab women who carry Western passports. The women were reportedly recruited to carry out suicide attacks against American and Western targets in the region.”

Obviously, not all of these women become terrorists. Farhana Qazi, a Pakistani-American Muslim previously with the Rand Organization and who now serves as a senior instructor to the US military, points out that “American converts to Islam seek a sense of belonging and come to Islam for many reasons. And most of these women do not become radicalized unless they are actively recruited by violent men.” Shaista Gohir, a consultant to the UK’s counter-terrorism program, similarly told the BBC, “Most Muslim women have no interest in violence.”

But violence is not all that radical Islam involves. Indeed, in some ways, these women can be even more dangerous, either by encouraging violence in their sons, supporting it in their husband or helping to raise money for terrorist groups. And in the meantime, cautioned Shaista Gohir, “There is a small number of females who are being targeted [for violence]. This is very serious, because the numbers are slowly growing.”

And in the right place, at the right time, all it takes is one.

Abigail R. Esman, an award-winning writer based in New York and the Netherlands, is the author, most recently, of Radical State: How Jihad Is Winning Over Democracy in the West