Prime minister says Conservatives will bring back controversial anti-terrorism laws that are needed to protect the citizens of Canada.

In an exclusive interview with CBC News, Prime Minister Stephen Harper says the biggest security threat to Canada a decade after 9/11 is Islamic terrorism.

In a wide-ranging interview with CBC chief correspondent Peter Mansbridge that will air in its entirety on The National Thursday night, Harper says Canada is safer than it was on Sept. 11, 2001, when al-Qaeda attacked the U.S., but that “the major threat is still Islamicism.”

“There are other threats out there, but that is the one that I can tell you occupies the security apparatus most regularly in terms of actual terrorist threats,” Harper said.

Harper cautioned that terrorist threats can “come out of the blue” from a different source, such as the recent Norway attacks, where a lone gunman who hated Muslims killed 77 people.

But Harper said terrorism by Islamic radicals is still the top threat, though a “diffuse” one.

“When people think of Islamic terrorism, they think of Afghanistan, or maybe they think of some place in the Middle East, but the truth is that threat exists all over the world,” he said, citing domestic terrorism in Nigeria.

The prime minister said home-grown Islamic radicals in Canada are “also something that we keep an eye on.” 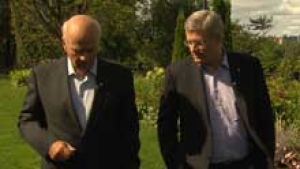 Harper said his government will bring back anti-terrorism clauses that were brought in in 2001 but were sunset in 2007 amid heated political debate.

There were two clauses at the heart of the debate:
■One allowed police to arrest suspects without a warrant and detain them for three days without charges if police believed a terrorist act may have been committed.
■The other allowed a judge to compel a witness to testify in secret about past associations or perhaps pending acts under penalty of going to jail if the witness didn’t comply.

Neither clause was used by police or prosecutors in the five years before they expired.

In October 2006, a parliamentary committee recommended extending the two provisions.

The Conservatives put forward a proposal to keep the measures in place for three more years, but the three opposition parties united to defeat the proposal in February 2007 by a 159-124 vote.

The rest of the legislation remained in force.

When asked by Mansbridge if he would try to bring those laws back, Harper replied: “That is our plan.”

“We think those measures are necessary. We think they’ve been useful,” he said. “And as you know … they’re applied rarely, but there are times where they’re needed.”