A Muslim cleric has declared selfies sinful, claiming that those who take them are succumbing to pride, ostentation and arrogance.

Popular Indonesian cleric Felix Siauw posted a series of tweets explaining why selfies should be avoided – but reserved most of his exasperation for women, who he said were being ‘shameless’ and ‘unpure’.

Siauw, who has over a million Twitter followers, wrote: ‘These days many Muslim women take selfies without shame. There are usually nine frames in one photo with facial poses that are just – My Goodness – where’s the purity in women?’ 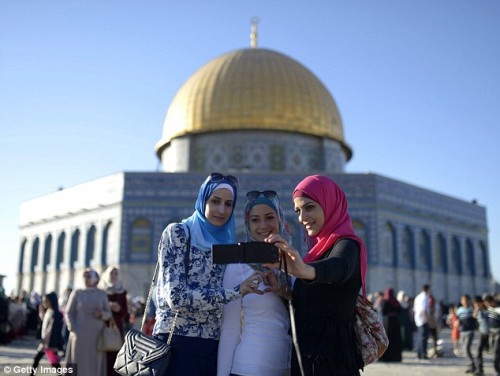 He also said that because selfie-takers are desperate for social media views, they’re being ostentatious, and because taking a selfie makes people feel ‘cooler’, we’ve ‘fallen into the worst sin of all – arrogance’.
PICTURE

However, there was a huge Twitter backlash against his messages by Indonesians. Hundreds have posted selfies on the social media site using the hashtag # Selfie4Siauw, Quartz reported.

Many were taken by women, dozens by men – and some purely for comedy purposes, with a camel and great white shark uploaded with the hashtag. 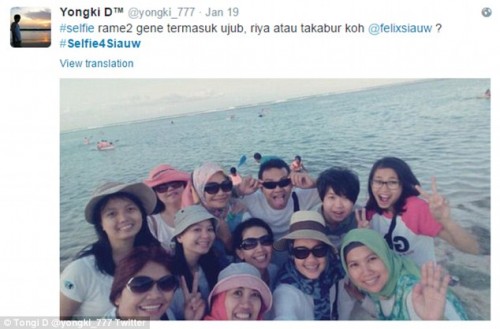 It follows a prominent religious scholar in Saudi Arabia giving the cold shoulder to snowmen – by issuing a fatwa against them.

A snowfall in the middle eastern country saw Saudis eagerly building snowmen and even snow camels.

However, Mohammed Saleh Al Minjed decreed that building snowmen – or indeed creating any living creature out of snow – was an insult to the Islamic religion.

He declared that inanimate objects such as ships and buildings could be imitated – or food – but not animals, according to Gulf News.

He wrote: ‘God has given people space to make whatever they want which does not have a soul, including trees, ships, fruits, buildings and so on.’

The fatwa – or religious ruling – was given a frosty reception on social media sites by some people.

Blogger Mishaal complained that the ruling took the joy out of the unusual weather.

He said: ‘We have snow for fleeting days, maybe even hours, and there is always someone who wants to rob us of the joy and the fun. It seems that the only thing left for us is to sit down and drink coffee.’

On Twitter users writing in Arabic and identifying themselves with Arab names joined in the debate.

‘They are afraid for their faith of everything … sick minds,’ one Twitter user wrote.

Another posted a photo of a man in formal Arab garb holding the arm of a ‘snow bride’ wearing a bra and lipstick. ‘The reason for the ban is fear of sedition,’ he wrote.

A third said the country was plagued by two types of people: ‘A people looking for a fatwa for everything in their lives, and a cleric who wants to interfere in everything in the lives of others through a fatwa,’ the user wrote.

Sheikh Munajjid had some supporters, however. ‘It (building snowmen) is imitating the infidels, it promotes lustiness and eroticism,’ one wrote.

‘May God preserve the scholars, for they enjoy sharp vision and recognise matters that even Satan does not think about.’

And blogger Al Marsad wrote: ‘It has no value in our traditions… those fascinated by the West should emulate their inventions and sciences, not their culture,’ according to Gulf News.

Snow has covered upland areas of Tabuk province near Saudi Arabia’s border with Jordan for the third consecutive year.

Last year the General Authority of Islamic Affairs and Endowment (GAIAE) in the UAE issued a fatwa against living on Mars.

The committee argued that an attempt to dwell on the planet would be so hazardous as to be suicidal and killing oneself is not permitted by Islam.

The astronauts, the committee said, would end up dying for no ‘righteous reason’ and would face the same punishment in the afterlife as someone who’d committed suicide.

The GAIAE has issued around two million Fatwas through its Official Fatwa Centre since its inception in 2008.

In Malaysia, meanwhile, Muslim clerics have issued fatwas banning everything from yoga to Valentines Day in a bid to stop the influence of Western culture.

To ensure Muslims can keep pace with the rules, an ‘e-fatwa’ site has been started the Globalpost reports. The issue recently came to a head at a dog-petting festival for Muslims, with the organiser receiving threatening phone calls.

Muslims are taught that canines are unclean.

Malaysian activist Zainah Anwar, recently wrote that Muslims are ‘sick and tired of being told, yet again, of more categories of Muslims and practices to be denounced, hated and declare deviant’.

Her women’s rights group, Sisters in Islam, has also been targeted. It was issued with a fatwa for pushing ‘liberalism’. It had pushed for Muslim women to be able to enter beauty pageants.

The group were challenging the ruling.

The list of fatwas now includes, Halloween, which is said to be too Christian and black metal because it is ‘powerful enough to force a Muslim to forsake his faith’.

Botox is banned, but can be used if medically necessary.