Meet the real Stephen Harper and then make sure he doesn’t come back….PPPLLEEEASSEEEE!!!
This is an informative article from Michael Harris.

In politics, as in baseball, the rule is simple: Three strikes and you’re out.

When Stephen Harper finally shambles towards the showers, head down, bat in hand, I’ll be thinking of Mighty Casey. For much of his career, Harper has umpired his own at-bats. But that role will soon — if briefly — fall to the people of Canada. Election Day is coming to Mudville.

Strike one against this government of oligarchs and corporate shills comes down to this: They have greedily championed oil and gas while doing nothing to protect air and water. Consider the piece of legislation with the Orwellian name — the Navigable Waters Protection Act. NDP house leader Nathan Cullen said it as well as anyone could:

“It means the removal of almost every lake and river we know from the Navigable Waters Protection Act. From one day to the next, we went from 2.5 million protected lakes and rivers in Canada to 159 lakes and rivers protected.”

And who gave the Conservatives the blueprint for gutting the Navigable Waters Protection Act? The pipeline industry. The new legislation gave them a big plum: Along with power lines, pipelines were removed from the legislation altogether. 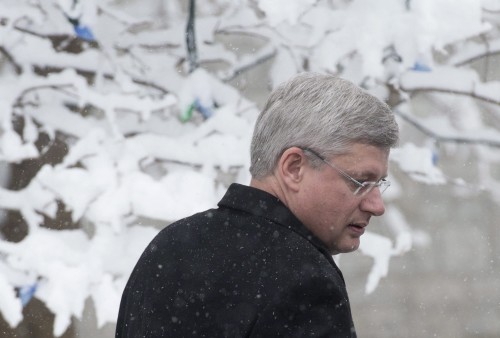 After eight years in office, Harper’s promise to regulate the energy sector remains as empty as the look behind his eyes. There’s a reason the Green Party just enjoyed the best fundraising year in its short history. May, like most Canadians, sees the big picture: All Stephen Harper has done in office is play shortstop to big business.

Canada now has more corrupt companies on the World Bank’s blacklist than any other country in the world. A stunning 115 of those companies are comprised of disgraced engineering giant SNC-Lavalin and its subsidiaries — the same company that the Harper government supported with an $800 million loan guarantee to build the dubious Muskrat Falls power development in Newfoundland and Labrador.

Big business keeps telling workers they can’t have defined benefit pensions. Yet 43 per cent of Canadian CEOs have reserved that option for themselves. The PM has nothing to say about the gulf between worker and CEO pay packets.

The Conservatives have ignored the great issue of the age — the environment — and have offered instead a robber-baron vision of Canada built on unsustainable development and inflated oil prices. The lion’s share of the benefits have gone to foreign corporations and speculators.

Albertans get a tenth of what Norwegians get from the sale of their non-renewables. Since the public owns those resources, this amounts to a form of theft.

The Harper government has sabotaged international efforts to set a bolder course on global warming. How badly has he betrayed the environment? We’re talking Benedict Arnold here: He has transformed Environment Canada into just another oilpatch stooge, violating the purpose for which it was created.

And for the third time in a year, the Harper government is trying to stop an investigation into Canada’s environmental record. Although there is evidence that chemicals from toxic tailings ponds created by the tar sands are seeping into adjacent groundwater in Alberta, the Harper government is trying to terminate a proposed NAFTA probe into the environmental effects of tailings ponds. Poison leaching into the ground — and Harper doesn’t want a factual record.

Of course he doesn’t. He didn’t want a factual record on endangered polar bears or salmon farm pollution. And remember, this is the guy who didn’t mind selling asbestos to other countries when it was being treated as a deadly carcinogen here in Canada.

Strike two against Stephen Harper is his personal failure to give Canadians a more open, ethical and democratic government. That is, after all, what got him elected in 2006 (that and a little cheating during the campaign). So it was beyond hypocritical this past week for the PM to portray himself as a champion of democracy and free speech after the dreadful killings in Paris. He even politicizes tragedy.

Here is the real man … the one who dedicated his entire communications effort to smothering free speech, who undermined access to information, the life-blood of any democracy, with endless delays in handing over government documents that belong to us. In some cases, his government has simply — and unconstitutionally — refused to fork them over. He has also mused about charging $200 per access request — which would certainly suppress the urge to ask.

The real man has muzzled his own workers — even demanding loyalty oaths from them. He wanted the right to ask prospective government employees about their politics. He has viciously attacked any individual or institution that opposes him, from former parliamentary budget officer Kevin Page to the Chief Justice of the Supreme Court of Canada.

The real man repeatedly has tried to turn the Internet into a servant of the police state, disguising his intent with nonsense about child pornographers and “protection”.

The real man has starved the opposition of even the most basic information about the budget and deprived Parliament of the ability to debate legislation through the cynical use of enormous omnibus bills.

Sheila Fraser has named the disease. Laws are being passed in Stephen Harper’s Canada without scrutiny. (That didn’t seem to bother the dear host of CBC’s The Current when she interviewed on my new book. But it bothers me, and a lot of other people, a great deal.)

The real man doesn’t speak to his fellow premiers as a group, banishes journalists from public buildings and thinks Sun News is where it’s at.

It didn’t take a genius to work out that Harper’s reaction to the robocall scandal would be new legislation that will make it harder to catch cheaters the next time. And trust me, there will be a next time. So let it be said clearly: Stephen Harper is a champion of screwing free speech and democracy at every opportunity.

What’s strike three? Canada is not Harperland. Stephen Harper is not who we are.

Canadians don’t want to see medicare slowly reduced to a ghost of its former self by a prime minister who once headed an organization created to destroy it.

Despite the stunning selfishness of some of its stars, Canadians don’t want to see the CBC brought to its knees and “restructured” by a man who prefers public relations to journalism.

Finally, Canadians don’t want to save money on the backs of veterans who didn’t take to the closet in the face of clear and present danger — especially when Harper has so egregiously used the military for political gain. There has to be more for our soldiers than bullets and beans.

I don’t think it’s working this time. I suspect that when Mighty Steve strikes out, there will be joy in Mudville.

Michael Harris is a writer, journalist, and documentary filmmaker. He was awarded a Doctor of Laws for his “unceasing pursuit of justice for the less fortunate among us.” His eight books include Justice Denied, Unholy Orders, Rare ambition, Lament for an Ocean, and Con Game. His work has sparked four commissions of inquiry, and three of his books have been made into movies. His new book on the Harper majority government, Party of One, recently hit number one on Maclean’s magazine’s top ten list for Canadian non fiction.