Muslim Immigrants Smash to Pieces & Urinate On a Virgin Mary Statue in Italy.

If Christians did this to the prophet Mohammad, Muslims around the world would go about acting like savages, killing and rioting. They want us to respect their religion but they have no respect or acceptance of other religions. This the difference between Islam and other world religions. We can act angry and hurt but we would not go about killing but then maybe if we did they wouldn’t treat us with such disrespect and consider us easy prey.

This is sheer animalistic hatred against Christians – they know it is a blatant act of blasphemy to do this to a Virgin Mary statue. These followers of Allah are defiling the mother of Christ and all that is holy in Christiandom by doing this. It’s rich that they were called ‘foreigners’ instead of Muslims. And it is beyond ridiculous that the Catholic Church would automatically, without a second thought, absolve Islam of all wrong doing here. They know good and well it is an act of religious hate from the Religion of Peace. The Pope is so busy pushing Marxist rhetoric and policies, while being politically correct that he has lost sight of those that are the enemy of the church and what Catholics believe. Hatred cannot be absolved or befriended. 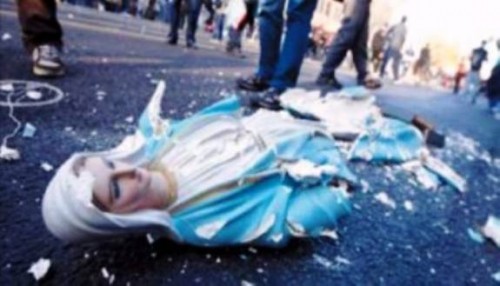 So, will all Christians, of all factions, now have to look at their surroundings and over their shoulders as they pray? How many Christian churches have to be burned to the ground… how many Christians have to be blown up, beheaded and crucified before the leaders of our churches say enough is enough? Are we to be lambs to the slaughter of our enemies and the enemies of what we consider good and holy? Against Jihadists, appeasement is suicide and multiculturism is death on a cracker.

THIS IS HOW IT HAPPENED….
Immigrants attacked [a] local Christian in Perugia and then smashed and urinated on a Madonna statue.

A man was kneeling in prayer before the statue of the revered Madonna, with the photograph of a loved one in hand, in the small chapel of St. Barnabas in Perugia (Italy), when he was attacked by five “immigrants.”

The first thing they did was rip the photo from his hands.

Next they unleashed their hatred against the image of the Virgin Mary. They broke the statue to pieces and then urinated on it.

Don Scarda, pastor of St. Barnabas, said the event was led by five “foreigners.” By the time police arrived at the chapel, the unidentified attackers had already fled.

The incident has caused a stir among locals. Some have lambasted Pope Francis who is accused of appeasing immigrants—mostly Muslims—to wild extremes. Earlier he had said that “Migrants, through their own humanity, cultural values, expand the sense of human brotherhood.”

Although the Diocese condemned the act of sacrilege against the Madonna statue, it also followed the Pope’s lead by absolving Islam of any responsibility for what happened.